Shane’s official foray into winemaking took place in 2001, although the seed was planted many years earlier when his family established their Adelaide Hills vineyard. A previous career path (marine biology and aquaculture) brought him to Tasmania where he took up a vintage cellarhand position to help pay the rent whilst undertaking post-graduate research.

Two weeks into harvest and he was hooked! From his new home base in Tasmania, Shane completed the Adelaide University post-graduate degree in winemaking and embarked on vintages in the Adelaide Hills, Yarra Valley and Oregon (USA). The passionate and dynamic winemaking community in Tasmania, and the enormous potential for discovery, lured him back.

Fran joined Shane in their Delamere Vineyard business in 2011. Relocating to Tasmania from her home state of Western Australia a decade earlier to pursue a passion for cool climate wines, Fran’s interest in Champagne style wines trace back to her days studying winemaking at Adelaide University. With many years of winemaking experience in top wine regions around the world, including Burgundy, Oregon, Yarra Valley and the Adelaide Hills, Fran chose to settle in Tasmania due to the unparalleled fruit quality. Who would have predicted a girl from Kalgoorlie would end up making cool climate wine in the apple isle?  Not many! But certainly there is no place Fran would rather be. 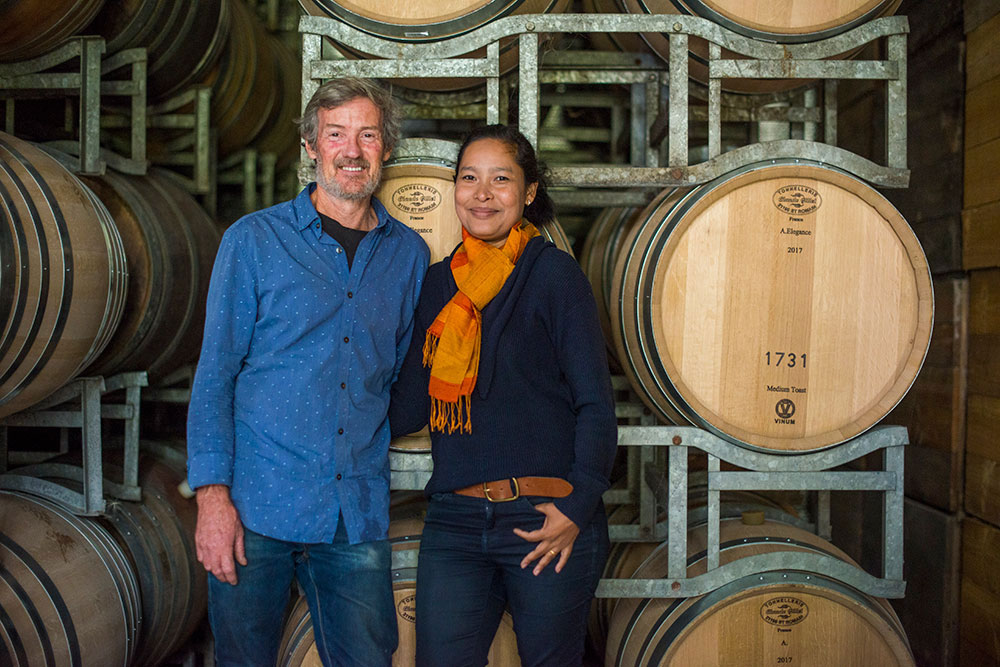 Brett and Cherry are a husband and wife team, who first joined us as part of our picking crew. The way Cherry tells it, she had always dreamed of working at a vineyard. We all ended up with more than Cherry bargained for, after we sneakily transitioned them into the role of heads of disgorging, packaging, bottling and stock management. In their spare time they work on their garden, and Brett recently constructed a luxury ‘teardrop’ caravan from scratch. Their core ethos is “We work as a team, (and do it Cherry’s way).”

Close planted, on the side of a steep freezing cold hill, Delamere is a vineyard that demands to be managed 100% by hand.

The vineyard was planted at 7500 vines per hectare and has a cane-pruned, vertical shoot position trellis system, with a very low fruiting wire at 60cm off the ground. The low yield per vine and the reflective heat from the ground produces wines with superior depth of flavour and ripe, well-developed tannins. Vine age and subsequent natural balance are key factors in the consistent production of wines with great structure and harmony.

The region of Pipers River in the north east of Tasmania enjoys a significant climatic advantage that is unique in Australia; that of a very low diurnal range. This temperature stability is born from a unique set of geographical features. The waters of Bass Strait cool the hot northerly winds, while the cool southerlies gain heat as they cross the island. Cool temperatures and significant sunshine hours make for ideal conditions to retain delicate aromas in our fruit. The frosty and sometimes wild conditions of winter give way to clear, crisp, blue-sky days through the growing season, allowing the fruit to ripen slowly and evenly, assuring the lingering acidity essential to producing premium cool climate wines.

In 2013 we expanded the vineyard, planting an addition 6 hectares, taking our total planted area to 12 hectares.